GitHub Copilot is created using OpenAI’s Codex API. It is an AI pair programmer that suggests autocomplete lines of code to users in Visual Studio Code. GitHub Copilot translates natural language into 12 programming languages. It is built in a way that it analyzes the context in the file you are editing, as well as related files, and offers suggestions from within your text editor. Copilot provides an easy way for developers to work together on projects, share code, and review changes.
It allows developers to easily manage their projects, track their progress, and keep up with their teams. Copilot also helps developers to keep their code organized and quickly find and resolve issues. With GitHub Copilot, developers can easily set up their development environment, collaborate with their teams, and keep their projects running smoothly.

How does it work?

GitHub Copilot is powered by OpenAI Codex. The auto-generated suggestions come from the context within the file, like function names, code comments, docstrings, file names, cursor position, and more. Based on this information, Copilot suggests code snippets that developers can accept by simply pressing the Tab key on their keyboards. The AI tool understands TypeScript, Python, JavaScript, Ruby etc. The suggestions occur from an open-source code within the GitHub repositories. To get the most out of GitHub Copilot, you should segment your code into smaller functions.
Make sure you’re writing good comments and docstrings as you’re working. Always use meaningful names for function parameters, as this will make it easier for Copilot to understand your internet.

These are a few shortcuts in GitHub that help developers in saving their time.

Here are a few snippets on how GitHub copilot functions: 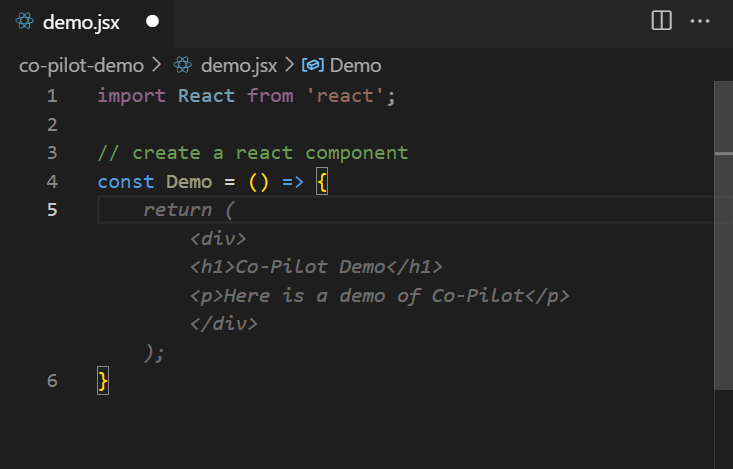 What are the benefits of using GitHub Copilot?

How are developers at Springworks benefitted?

Developers at Springworks subscribe to GitHub copilot’s individual plan through the company’s corporate card. Before taking the subscription some of them make use of the trial period to evaluate and understand the functionality and versatility.
This helps them to not think over repetitive or boilerplate codes. The latest feature of voice command helps developers and programmers to do things like move to different lines of code, or navigate to methods or blocks. They can even control Visual Studio Code, with commands like “run the program” or “toggle zen mode.” The developers summarize what a chunk of code does, and even ask for a code summarization.

Here’s what they have to say on GitHub Copilot

“Whenever I need to write object names repeatedly, or if it’s written somewhere in a file with key-value pair, or with a similar pattern, it auto-suggests that helps in saving time to re-write them again. It also helps write common utility functions, and then change those functions as per the need”.

“I have been using copilot from the time it was released for technical preview. So much of the code and mainly unit testing is faster to write because of it. It saves almost 30 minutes to 1 hour a day. It also helps set up a new repo or add boilerplate code without much business logic. Even with business logic, if one writes what they are thinking in words, sometimes we get most of the code and we just have to tweak”

“I have integrated copilot with my VScode. I use it frequently and it saves a lot of time. Copilot helps me to not think over repetitive and boilerplate codes”.

Building on Blockchain: A Day in the Life of a Software Development Engineer

Building on Blockchain: A Day In The Life of A Blockchain Engineer

Building on Blockchain: a Day in the Life of a Quality Analyst

I am an HR executive at Springworks. I curate employee stories and strive towards better work culture

Life At Springworks: A Day In The Life Of An Operations Specialist

Life At Springworks: A Day In The Life of A SDE Intern  

Meet Shashank Kumar, who hails from Ghaziabad, Uttar Pradesh. He completed his

Life at Springworks: A Day In The Life Of A QA Engineer

Meet Vikhyath, he is from Bengaluru, Karnataka. He completed his higher education

Meet Mahima Khandelwal, she is from Balasore, Odisha. She hails from a

Life At Springworks: A Day In The Life Of An Operations Specialist

Dolly Agarwal is from Dalkhola, West Bengal. Since her childhood, she kept

Meet Meghna, she is from Munger, Bihar. She holds a bachelor’s degree

Building on Blockchain: A Day in the Life of a Software Development Engineer

Each day, everyone at Springworks comes into work with a

Building on Blockchain: A Day In The Life of A Blockchain Engineer

Each day, everyone at Springworks comes into work with a